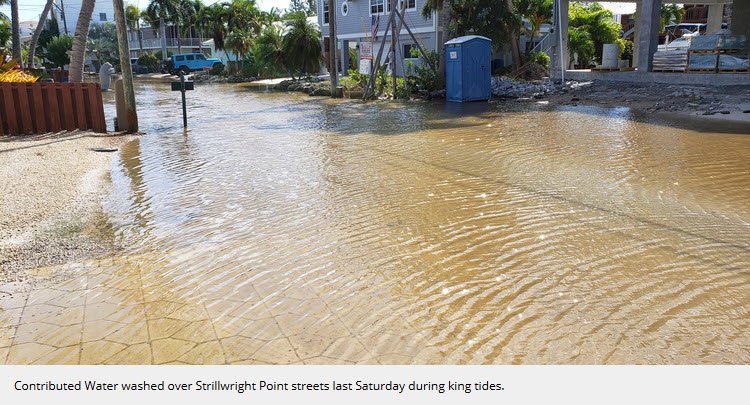 The small neighborhood has been deluged by the surrounding bay for more than two months and residents say recently water levels have been at their deepest.

“We are on day 74,” resident Janice Darden said last Saturday. She’s been logging the days since Florida Bay rolled into her neighborhood near mile marker 105.

“Hurricane Dorian came through on Aug. 31, and we were flooded by Sept. 3,” she said.

Assistant County Administrator Kevin Wilson said coastal flooding is a risk for the 77,000 people living in the low-lying Florida Keys but that county staff has been closely monitoring the Stillwright Point neighborhood as the county looks for a long-term solution.

“We have staff going into that neighborhood every day,” he said.

The county’s measure for success for pilot road elevation projects in Key Largo’s Twin Lakes and Big Pine Key’s Sands neighborhoods — two areas selected for the initial project — is to have no more than seven days of flooding in those subdivisions by 2040, according to Wilson.

“If we see more than seven days of inundation by 2023, then we will look toward better options,” he said. “We know where the flooding is. It’s Stillwright Point, and they’re likely to be next on the list.”

“I will be proposing to the commissioners to consider pulling the Stillwright Point neighborhood for priority processing under the county-wide roads elevation planning project so that we can have the recommendations for roads adaptation for that area far earlier,” Haag told the Free Press.

How to fund such efforts remains to be decided, Wilson said.

“We are going to prioritize neighborhoods. Will it be supported by the countywide infrastructure sales tax? Will it be localized taxing units or a special taxing district? It can be any and or all of the above,” he said.

Darden said she’s relieved to hear her neighborhood is being considered for prioritization and appreciated seeing a street sweeper clean the stench-filled muck left behind when the tide briefly abated.

“It’s about a foot deep on Center Lane. Normally it’s only about 6 to 8 inches along the encroachment, but its deeper now,” he said last Friday. “We had four or five days when the crest of the road appeared. That was a positive day, and this has been ongoing since August.”

He’s planning on invoking the county’s sounding board policy to speak at the Dec. 11 meeting.

Stillwright Point has been flood prone historically, but residents say this year is by far the longest the neighborhood has been underwater.

“This is the worst we’ve ever had it. Before this it was about 22 days and now we are close to 80 days or so. It’s gone beyond nuisance flooding. This is a whole different level,” Smyth said. “What we are hoping for the county to approve the start of the engineering and design phase. We don’t need pumps. They’re going to be ineffective and costly.”

Carl Hansen, who lives on South Blackwater Lane, where flooding isn’t as bad as Center Lane, agreed with Smyth.

“If they raised the road 4 to 5 inches in some areas, it would be fine,” he said. “I’m not saying that’s the case for all the roads, but certainly for some. Most of my street is fine and it’s the same with North Blackwater Lane. I have an eternal puddle and my neighbor’s house in the 21 years I’ve been here has never had any water.”

Jonathan Rizzo, a warning coordination meteorologist at the National Weather Service in Key West, said a number of factors conspired to intensify coastal flooding this fall. In addition to predicted king tides and sea level rise, hurricanes Dorian, Humberto and Lorenzo, and Tropical Storm Melissa gummed up the Gulf Stream, causing it it broaden and flood low-lying neighborhoods.

He said the bay may recede following the November full moon, which was Nov. 12. A new moon will occur Nov. 26.