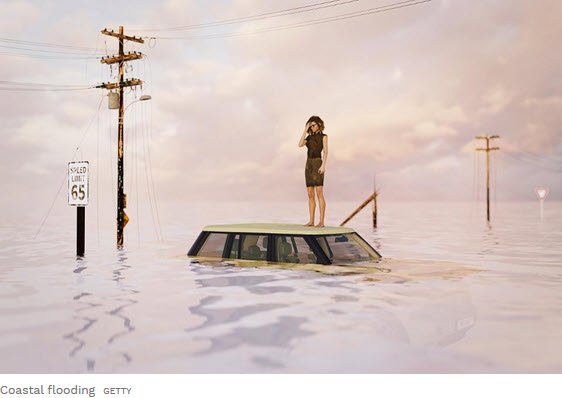 A new Climate Central research report released this week finds hundreds of millions more people than previously known live on land at risk from coastal flooding linked to climate change. The largest vulnerable populations are most heavily in Asia.

I ran a feature several years ago about billionaires already preparing for coastal flooding by purchasing mass amounts of farmland and inland properties to avoid this scenario.  According to The Land Report, over 100 wealthy families own 42 million acres of land across the U.S. Each of the 20 individuals and families that own the most land hold over a half-million acres each. Among them: John Malone, Ted Turner, Stan Kroenke, Brad Kelley, and Subway founder Peter Buck, with many more new acquisitions happening this year.

By 2050, sea-level rise will push average annual coastal floods higher than land now home to 300 million people, according to a study published in Nature Communications. High tides could permanently rise above land occupied by over 150 million people, including 30 million in China. Without advanced coastal defense and planning, populations in these areas may face permanent flooding within 30 years. 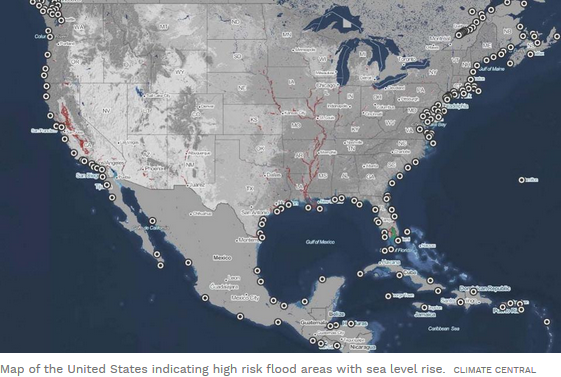 According to a Climate Central report this week, “Sea level rise is one of the best known of climate change’s many dangers. As humanity pollutes the atmosphere with greenhouse gases, the planet warms. And as it does so, ice sheets and glaciers melt, and warming seawater expands, increasing the volume of the world’s oceans. The consequences range from near-term increases in coastal flooding that can damage infrastructure and crops to the permanent displacement of coastal communities. Over the course of the twenty-first century, global sea levels are projected to rise between about 2 and 7 feet, and possibly more. The key variables will be how much warming pollution humanity dumps into the atmosphere and how quickly the land-based ice sheets in Greenland and especially Antarctica.” 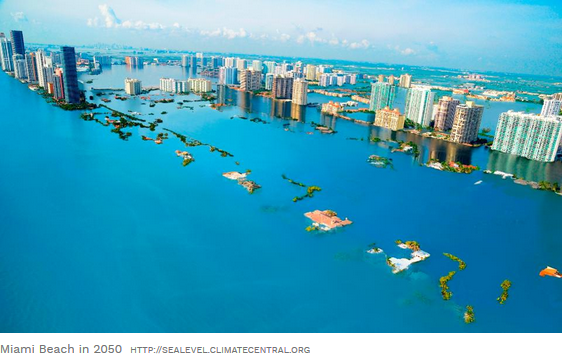 Below are detailed maps from U.S. Climate Central, which shows accurate risk zone areas in the U.S. as well as detail on the disaster zones and locations. All maps are based on an extreme 10-foot water-level rise plus a high tide flood possibility to show how dangerous this situation could become. Many of these coastal areas have some of the most expensive properties in the world, including Miami Beach, the Hamptons, and Malibu Beach, among others. More than 99 percent of today’s population in 252 coastal towns and cities would have their homes submerged. 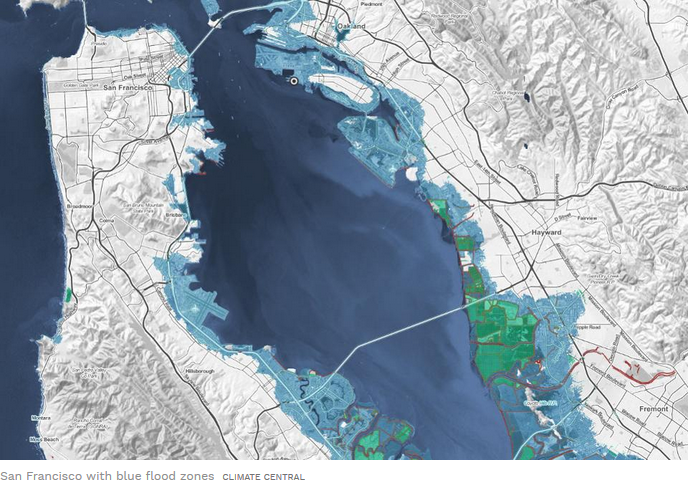 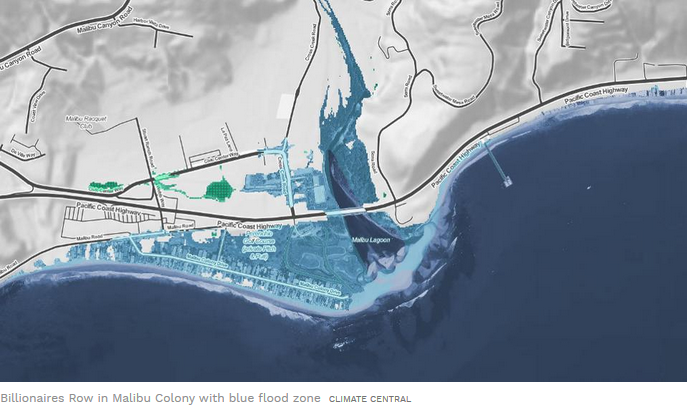 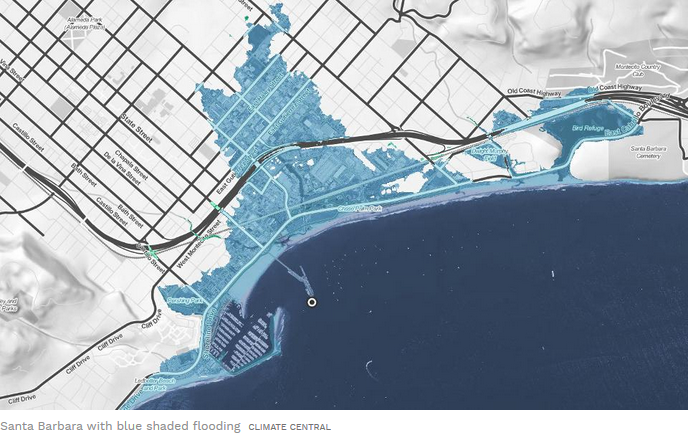 Alameda, Monterey, Santa Barbara, San Francisco, Santa Monica, Newport Beach, La Jolla and San Diego are all high-risk zones in the state. 1,300 square miles of land lie less than 3 feet above the high tide line in California, Oregon and Washington. Among the high-profile beach properties in the state are a mansion on Billionaire’s Beach in Malibu, California, which Hard Rock Cafe’s Peter Morton sold for $110 million in April 2018. 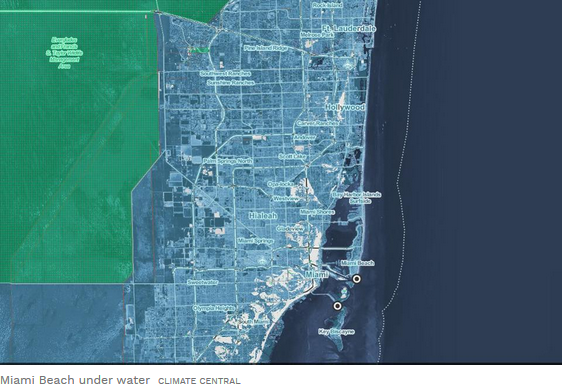 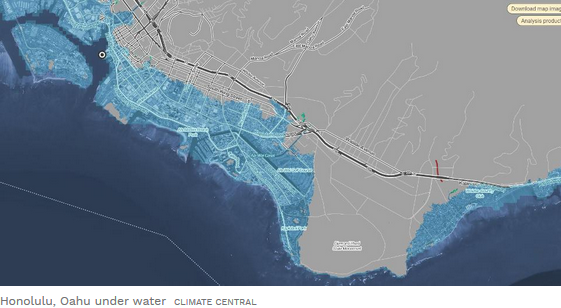 Honolulu/Oahu, Mokuoloe/Oahu, Kahului/Maui, Kawaihoe/Hawaii, Hilo/Hawaii are all in high risk zones in the state. Ebay billionaire Pierre Omidyar owns one of the expensive beachfront properties in the Kahala area in Honolulu. 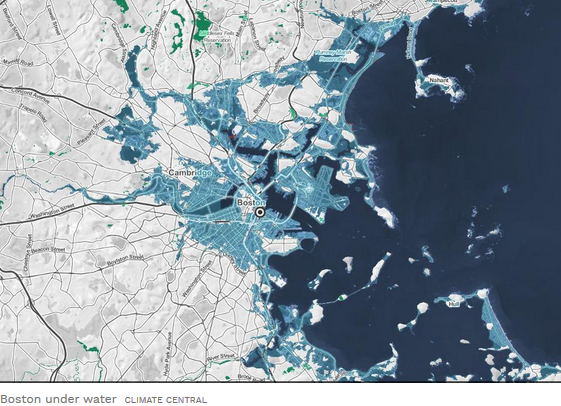 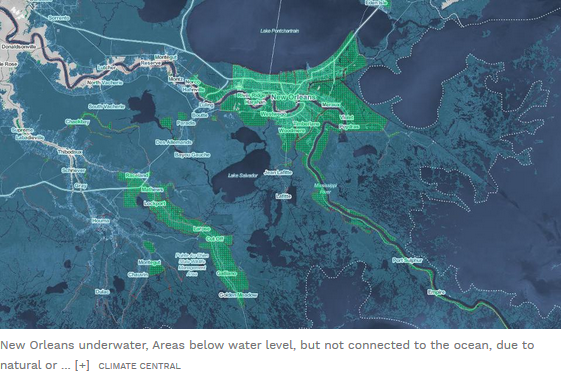 Statewide in Louisiana, more than one million people live below 6 feet, including roughly a quarter million that appear to lack levee protection. Louisiana has more than 5,631 square miles of land at less than 6 feet, half of which is in 5 Parishes: Terrebonne, Cameron, Vermilion, Lafourche, and St. Mary – increasing to 6,791 square miles less than 10 ft above the tide line. 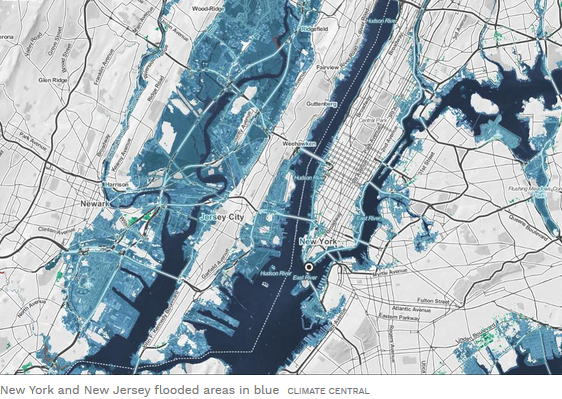 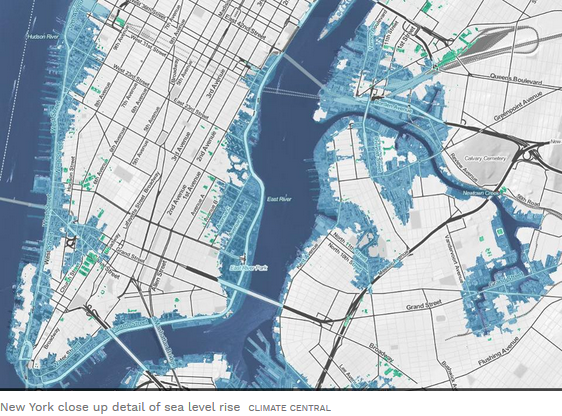 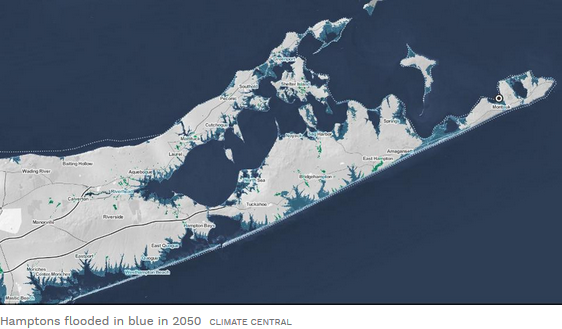 Manhattan, Battery, Hamptons, Montauk are all in high risk areas. 120 square miles of land lie less than 6 feet above the high tide line in New York. 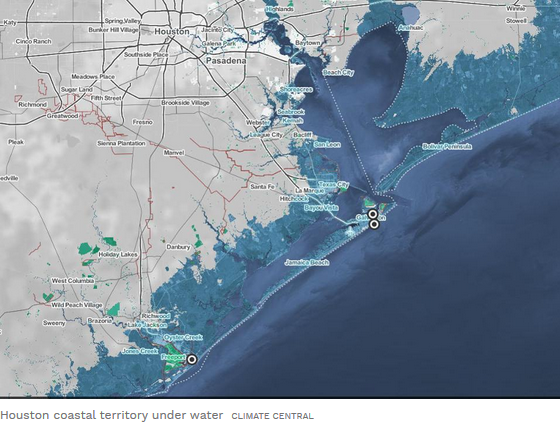 Corpus Christie, Houston, Rockport, Freeport, Galveston. Texas has 685,000 acres of land, or more than 1,000 square miles, at less than 5 feet. Harris and Cameron counties combine to make more than half of the 5-foot exposure – and the city of Houston makes up one quarter of this overall exposure.